GABRIEL DULONG BLENDS HIS PASSIONS INTO A CAREER

THE JOURNEY TO MASTER BREWER

Over the past eight years, Gabriel Dulong has been working flat out to come up with the very best brews. This authentic artisan brewer has made good use of his talent to put Boréale on the map.

The most important element, though, is Gabriel’s passion.

He put off thinking about his future for a long time, but there was no denying Gabriel’s passion for beer. It all started in his garage, long before his creations became a huge success.

Gabriel ran a few experiments – just for fun – then signed up for McGill University’s food chemistry program, which opened up some new perspectives. He could now turn his passion into a profession.

Next came a foray into the beer industry – an essential in pursuing his career – and he was hooked right away during a visit to the Boréale facility.

Gabriel was captivated by the extensive brewing system and the evident passion of Laura Urtnowski, co-founder of Les Brasseurs du Nord. The choice was clear: this was where he wanted to start his career.

Little did he know how far this experience would take him… but this part-time job was just a start, and he still had a long way to go.

Saying goodbye, and coming back to something better

After that first stint at Boréale, it was time for Gabriel to build on his experience somewhere else.

He pursued his studies in this field at the Institute of Brewing and Distilling, in the United Kingdom, working toward a single goal: being able to create his own brews someday.

Another opportunity came up at Boréale just a few years later… and Gabriel came back in a big way: as the company’s master brewer.

He has been racking his brains since 2014 to create all-new flavours, making every effort to present you with quality products.

His philosophy: to innovate constantly, so he can provide beer lovers looking for more with an exceptional taste experience.

Boréale beers have always been brewed naturally, with passion. The ingredients are chosen with care and the recipes skillfully developed. Not one step is left to chance when concocting a beer! As they say, the devil is in the details.

The master brewer’s job is tough, but far from conventional. Gabriel’s day-to-day routine – from morning till night – has been transformed into a playground of taste experiences.

Before that first sip of his morning coffee, he has to taste and approve the various beers produced the previous night. Another round of tastings happens at around noon. Everything has to be carefully monitored: the beers ready to put into cans, as well as the ones in fermentation and those still brewing.

It doesn’t stop there, however – next comes the artistry.

The opening of our Relais Boréale in Montréal presented Gabriel with a whole new playground: a place where he can give free rein to his creativity and test a number of new beer styles. It’s a great way to get back in touch with his creative side: trying new ingredients and new techniques.

Brewing beer is much more than just a job for Gabriel. He himself has said that he sees it as a way to share an experience, give people what they love… and that’s exactly why we’ve totally trusted him for so many years. 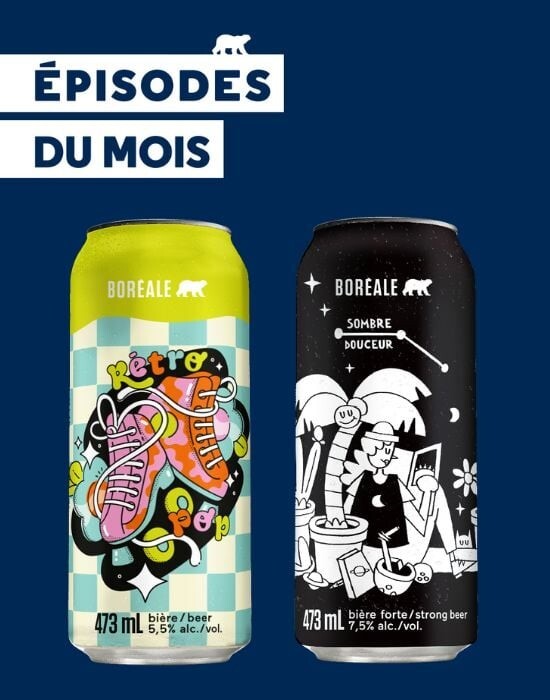 Episode of November - Points of sale